Neither Snow nor Rain nor Online Forms from Hell

I went to the local library today to fill out the information required for a background check. I had to provide addresses for places I’ve lived for the last 5 years, adresses and phone numbers for persons who can vounch for my having lived at these addresses, edication from high school on up, complete with addresses and the dates I received diplomas, work history with dates, names of supervisors, and phone numbers, disclosure of criminal record… Are you still reading? Why? This is boring.

It took an hour and a half. The email with the link told me it would take 45 minutes. I felt inept. I wanted a drink. I think most of the questions were there to help me prove I am who I say I am. Is there that much identity theft that this is necessary? I also began to think the whole thing was contructed to weed out people who weren’t willing to put forth the effort.

I was willing to put forth the effort. I’m going to like this job. I will get to be friendly in short bursts. I will work alone most of the time. I’ll get to see the world or at least one part of it over and over again.

I go for fingerprints the first week in October. After that I be given a start date. Unless there’s something off about the drug test or the background check, the job is mine.

Another Friend Laid Off

“The Lord God took the man and put him in the garden of Eden to till it and keep it.” (Genesis 2:15)

Almost every morning while I drive to work, National Public Radio reports certain indicators pointing to a movement toward economic recovery. Many people have bought cars by using cash for clunkers. Many others have bought existing homes by tapping into first-time homeowner incentives. These indicators seem more like crutches that support us in our habit of buying and consuming rather than markers of renewed stability.

A statistic that seems more real to me is the national unemployment rate. It was 9.4% for July 2009 was, compared to the previous year’s 5.8% (Bureau of Labor and Statistics). I know there has to be a connection between the habit of buying and consuming that I bemoan and the unemployment rate. I’ll let economists sort that out. The reason why the unemployment number looms larger in my mind is because it is a number that has affected friends and coworkers. It’s a percentage that continues to weigh upon my thoughts and is probably one of the reason my stomach keeps churning.

For several months now, I have struggled with the whole idea of work. There’s work, there’s vocation, there’s “calling” (the work God gifts each of us to do). What happens when an economy says, “Um…no, there’s really no demand for that now. You’ll have to find something else to do. Good luck!”?

I couldn’t find very much in Scripture that talked about work. It seems to me that anything that varied very far from the basic tending of the Garden brought about trouble. I do remember Jesus saying something about how we cannot serve both God and money, and I know that he taught about money as a topic second only to the kingdom of God.

I ramble. I’ll go ahead and post this, though, because I want my unemployed friends to know that I pray with them daily. I pray for our peace of mind, for our needs to be met, and for satifying, fulfilling employment. And I pray that we can move away from fear and toward gratitude, remembering who and whose we are. 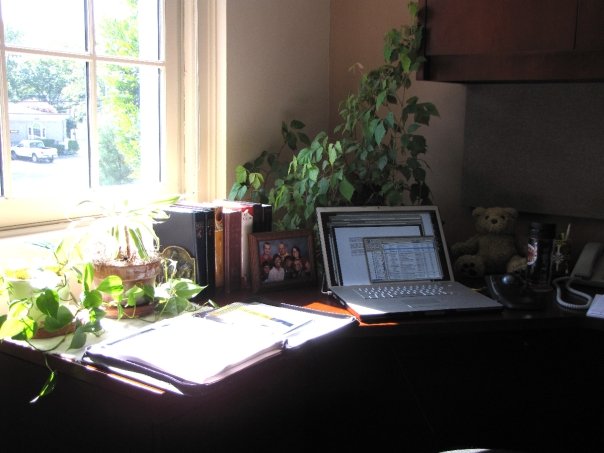 Stepping Out of My Routine

I hate stepping out of my routine, even for little things. Someone (LadyVol1?) commented at some point that I had a need to be in control. I think that’s at the heart of why I dislike so strongly changes in my routine.

Spontaneity? I can handle that, which might sound contradictory. However, I like surprises. Also, there’s no way to have three kids without being at least a little flexible.

Today I am attending a work-related dinner. I enjoy spending time  with my colleagues, but I’m missing my workout. There’s a spiritual practice involving living in the moment that could help me in these situations. It seems so pointless to expend energy wishing one could avoid what one perceives as an interruption. Living in the moment makes sense.