You can watch the original song sung by Stewie Griffin here.

I recently found Madonna’s Confessions on a Dance Floor as a continuous mix on Rhapsody. I suspect the CD has always been formatted this way, with songs flowing from one to another. But if you get your music via digital download, then there’s always a break between songs as the next track loads. Is this a huge problem? Of course not. But when there’s an easy workaround, why not provide it? It works great for a workout.
If anyone knows a way to encourage artists to do this more often, point me in the right direction! 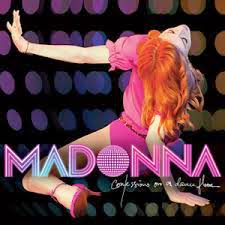 I’m always looking for music for my workouts. I subscribe to Rhapsody through Verizon Wireless, and that gives me unlimited subscription access to music. So why do I wind up listening to the same three albums over and over?

Here’s a playlist I cobbled together from some favorite one-hit wonders from the 80s. If I put my player on shuffle, it should do me for awhile, but I want your ideas. Post your workout playlist as a comment.

On the Sunday of our recent camping trip, we decided to go to church at Bethlehem United Methodist Church near Clarksville, Tennessee. I served that church as pastor for two years and it was a joy to worship there once more and to see the people again. It was also heartwarming to watch Sam and Ben remember the place and the people. (Ruth was only two-years-old when we were there before.)

After the service, Jimmy and Miriam invited us to their home for lunch where we ate bbq and fixin’s left over from their son’s graduation party. They set before us enough food to feed twenty people and did their best to catch us up on several years-worth of Bethlehem news. At some point, they introduced us to Muddy Water by Trace Adkins.

The video for Muddy Water was filmed at Bethlehem. As Jimmy talked about what it was like to have a video crew, a well-known actor (Stephen Baldwin), and a country music star (Trace Adkins) descend upon this small country church, I got a sense of the excitement it caused. Eventually, Miriam brought out a laptop, pulled up the video, and we crowded around their dining-room table to watch.

I didn’t listen very closely to the words of the song, but the images of the church, the creek, and the baptism deeply moved me. Adult baptisms don’t happen very often in small, rural congregations. However, I could remember having officiated for at least one baptism while I was at Bethlehem.

As I remember it, after the sermon on the Sunday of the baptism the congregation walked down the road past the cemetery and stood on the bridge overlooking the creek, hymnals in hand. The person being baptized and I walked through the brush to stand on the rocky bank of the creek. I looked up from below and began the ritual:

END_OF_DOCUMENT_TOKEN_TO_BE_REPLACED

Who knows what was going on with me last year, but this year’s American Idol finale got me thinking about previous year’s winners and runner-ups. Somehow I entirely missed American Idol 2007. After a few minutes of investigation, I discovered David Cook.

I listened to a couple of the songs and downloaded his album to my phone. I subscribe to Rhapsody through Verizon Wireless. For fifteen dollars a month I can download via subscription unlimited music, to up to four portible devices and two computers. It’s a great deal for a family that likes music. (And no, Verizon isn’t paying me to say any of this!)

If you want to read more about past American Idol winners and runner-ups, click over to my friend Jonathan’s article at Nashville Entertainment Examiner. Read his Idol-through-the-years summary and share your opinion in the Idol poll below.

I think Fox has a hit with Glee.