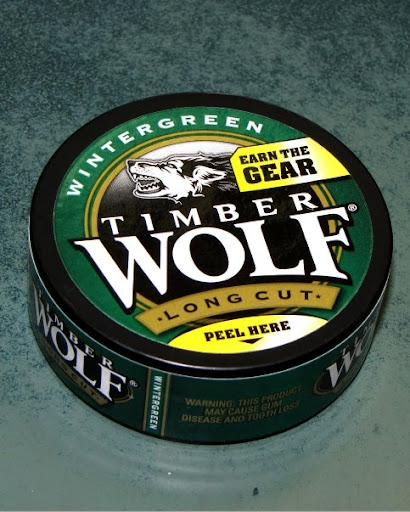 For over twenty years, I was a tobacco user. I quit in February 2008. Quitting ranks among the top-three hardest things I’ve ever done.

I started during my freshman year in college. It was then that a girl introduced me to my first dip of smokeless tobacco in the tv room of the Wesley Foundation. And thus, an addiction was born.

In the beginning, I used tobacco because it relaxed me, gave me a buzz, and made me feel butch. I don’t know when it happened, but at some point the pinch between my cheek and gum lost its effectiveness. Tobacco no longer did anything for me, but I felt anxious and cranky if I went without it for too long. “To long” became shorter and shorter. I used a little bit almost constantly. I learned to hide it, using just a little at a time and always carrying a travel coffee mug around with me to spit in. Of course, I wasn’t hiding anything. People knew. They were only gracious enough, or embarrassed enough, not to say anything.

Over the years, members of my family pleaded with me to stop. They sent me articles about the hazards of using smokeless tobacco. They complained about the flecks of tobacco they found around the house where I’d spill a little going from can to mouth. Later, when I started working out regularly, Ben especially pointed out the hypocrisy of my spending so much time at the gym while I continued to practice such an unhealthy habit.

I tried to quit many times. I’d lay off the stuff for two or three days, especially at the beginning of the season of Lent. However, the only thing these unsuccessful attempts to quit accomplished was they let the nicotine buzz return when I’d pick it up again. I tried chewing regular gum, nicotine gum, using the patch. I tried an organic alternative that was basically chopped up clover flavored with mint and molasses. I tried taking Welbutrin, an antidepressant with a side effect that sometimes helps people quit smoking. Nothing worked.

The last cessation aid I used was Chantix. You’ve probably seen commercials for this drug. It’s the one with the rabbit and the turtle moving along a calendar path toward a finish line that represents the end of tobacco dependence. One’s doctor must prescribe Chantix, and it’s expensive. My insurance didn’t cover any of the costs. I decided to let the high price of treatment work to motivate me to actually quitting.

Chantix is supposed to take away all of the feel-good things about smoking while it continues to let you feel the gross stuff. There’s no guarantee that it works for people trying to quit using smokeless tobacco, but I figured it was worth a try.

The program instructs you to set a quit date and to take the recommended dosage of Chantix. If you slip up after the quit date and use tobacco again, don’t worry! Chantix is building up in your system, making it easier every day.

Chantix started working, sorta. I still had cravings when I went without a dip. I still felt anxious and cranky. As much as I hated to admit it, I quickly realized that my need for tobacco was strongly stress related. However, I cut back on my tobacco use and kept taking the drug.

Sometime before I finished with the first round of treatment, strange things began to happen. I started getting the order of simple tasks mixed up. I remember being in the locker room at the gym and locking the locker without having put on my socks and shoes. Things like that happened more and more often. At first, I ignored these occurrences. However, one morning I measured out and boiled enough water to make coffee and to prepare oatmeal. I poured water into the French press for the coffee and then I poured the remainder down the drain. I picked up the empty teapot and expected water to pour into the bowl where I had emptied the package of instant oatmeal. Of course, there was no water. It freaked me out.

I found a online forum where folks were discussing Chantix and its side effects. I read posts that described experiences similar to my own. I decided to stop taking the drug. I also decided that I was going to beat my tobacco addiction.

Hours turned into days, days into weeks, weeks into months. Somewhere along the way, I quit for good. I was feeling pretty good about myself, except for that little spot on my lower right gum that wouldn’t go away. In fact, it seemed like it was getting worse. I called my doctor about it and I told him what was going on. He told me to make an appointment with an oral surgeon. Hearing the words “oral surgeon” made me want a dip.

I made the appointment and kept it. I thought the first visit would be a consultation only. However, after having a look at the spot, the surgeon offered to remove it right then, and he sent it off to pathology. The results came back negative for cancer and the doctor reported that what he had removed had been the equivalent of a callus. He also said something that surprised me. He said that smokeless tobacco users rarely develop oral cancer. I didn’t believe him. I have no proof, but I believe he used smokeless tobacco himself and was in denial.

I used smokeless tobacco for over twenty years, and I beat it! However, I do have regrets. I wish I had all that money back. I wish I had never started. I wish I didn’t still crave it every once in awhile. I also learned some things. I learned that bad habits are best not started at all. I learned to look for help when I need it, even if the help I find isn’t perfect and doesn’t’ completely solve the problem. I learned that I’m stronger than I thought I was. Finally, I learned that there are people in my life who love me even though I disappoint them in some things, and who care for me despite my flaws.

8 thoughts on “Kicking the Habit”