And There Where Cows at the First Christmas 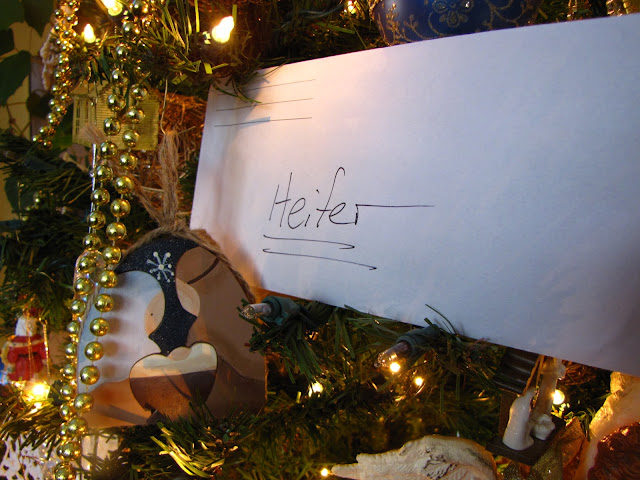 Last Christmas, the adults in my family decided to contribute the money we would have spent on gifts for one another (and on a few adult friends outside the family) to Heifer International. I think all of us had mixed feelings about the idea leading up to Christmas morning this year. Each of us saw potential gifts that we didn’t buy for one another and we felt strange about it. I wondered more than once how if I would feel disappointed on Christmas morning by not seeing the excitement on  loved ones’ faces as they opened gifts from me. I confess that I worried about not getting any presents to open for myself.

The wonder and worry were for nothing because Christmas morning was exciting, peaceful, and emotional. We watched the kids (all teenagers now) open their gifts and we experienced that feeling of excitement as we saw the joy on their faces. There was a new, peaceful pace to the morning because it wasn’t as chaotic with all the extra boxes, paper, and bows. And as each of us secretly put our contributions in the heifer envelope, I teared up when I thought about the difference our alternative-giving Christmas was going to make in people’s lives.

We’ll count the money later today and pick out the the animal(s) we’re going to give. I hope we have enough to buy a cow. After all, it’s called Heifer International. And there were cows at the first Christmas.

After we counted our money, most of us were holding back tears of joy as we realized we had enough money to buy two heifers, a sheep, honeybees, and two flocks of chicks. Frank read the moving copy from the Heifer catalog that described what each animal would mean to a family or a village. As he read about the sheep, the the radio played “In the Bleak Midwinter” and we heard these words:

It was enough to send us over the edge and eventually into laughter.

All of this is to say, without a doubt: BEST CHRISTMAS EVER.

One thought on “And There Where Cows at the First Christmas”