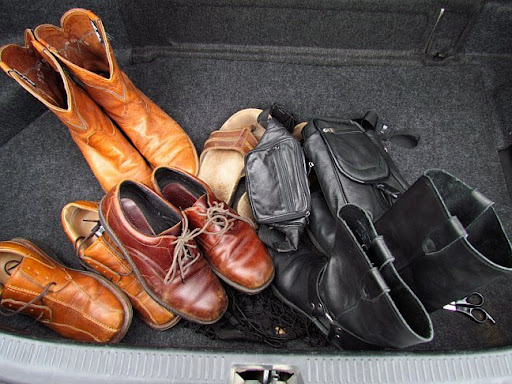 The shoes in this pictures went into my truck and on to Goodwill. The boots were hard to get rid of since they are in good shape and they were expensive when I bought them, even though I almost never wore them. I held on to them for as long as I did out of some unfulfilled fantasy that a hunky cowboy would knock on my door one evening  and take me out two-stepping. I don’t know any cowboys and I don’t know how to two-step, so giving away the boots was a smart move. Letting go of that fantasy was even smarter.

One pair of shoes, the ones on the far left, always looked to me like they’d been run over by a car. The other brown shoes were nice, in a broken-in-kind-of-way, but they were fairly uncomfortable to wear. The same was true for the flip-flops.

Okay, I hear you. “Um, is that a fanny pack I see?” Yes, it is a fanny pack. Don’t judge. I’m 46 at the time of this writing. How many other 46 year olds have owned fanny packs? I kept that fanny pack because I loved it! Yes! I loved my fanny pack! It had a perfect amount of zippered compartments and credit card slots. It even had a see-through slot for a driver’s license. I held on to the hope that one day fanny packs would make a come back. But I have to admit that even in their heyday (when was that, exactly?), they looked pretty dorky.

“No, I wasn’t pointing out the fanny pack, but thanks for asking. Actually, I was wondering if that was a murse. Is that a murse I see, or is it a European shoulder bag? … Bwaaaaahahahahahaha!”

Sigh. Yes, I owned a man purse. But I don’t anymore, okay? So stop your laughing.

Seriously. Can we move on now?

Let me tell you about the shoes I have left. I want to know if you think what I decided to keep is excessive. Here’s the list:

5 thoughts on “This Week’s Purge: Shoes”

The views expressed on this blog are of a personal nature and do not reflect the corporate view of my employer.
<span>%d</span> bloggers like this: