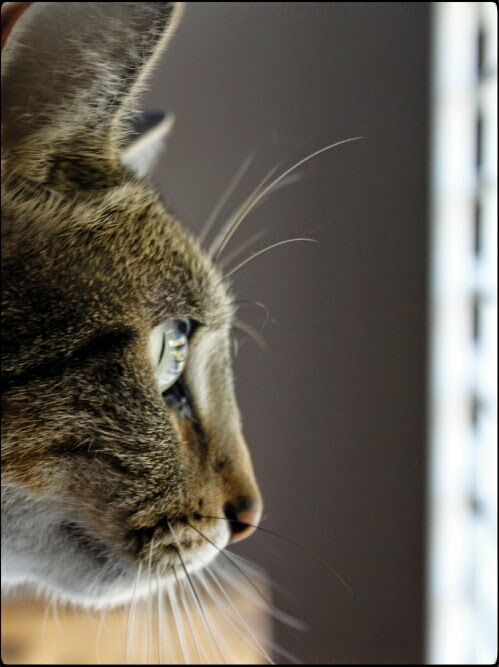 Today I am grateful for my cat, Fred.

Fred came into our lives a couple of years after we moved into our home of fourteen years. In the move we brought with us a solid black cat named Ray, but about a month after settling in he got out of the house and was probably eaten by coyotes. After trying to adopt a cat from the local animal shelter that turned out to be in poor health, eventually Frank and I found ourselves at Petco looking for a replacement through their adoption service.

There were several cats at Petco from which to choose, but I immediately honed in on a black cat, similar to our lost Ray, and asked a sales associate if I could hold him. Oddly, she replied, “You don’t want that cat. You want this cat.” She opened the cage, picked up a grey tabby, and put him in my arms. He immediately stretched out the length of my arm and nuzzled my neck with his head. The cat soon-to-be-named Fred knew he was going home with us.

Given Ray’s suspected demise, I try to keep Fred and our other critters in the house unless I’m outside and able to watch them. Fred often has other goals. He enjoys waiting inside the house by the interior door of the garage until I drive up to the house and open the garage door. That’s when he makes a run for it via the kitty door. His escape usually amounts to his running across the front porch and along the side of the house to the patio around back where he waits for me to let him back in. It’s a game we play.

Last night after dinner with a friend, Fred and I played this game, only this time he wasn’t waiting on the patio when I opened the sliding glass door to let him in. I called, “Fa-re-ed!” in the familiar way I do with no results. I did this off and on for the next hour, calling his name and shaking the kitty-treat jar. Nearing panic, I expanded my search until I eventually found myself walking through the neighborhood calling, “Fa-re-ed, Fa-re-ed!” along the sidewalk, up to the traffic circle, and around the overgrown briars, milkweed, sumac, and goldenrod on the hill behind our house. Desperate, I looked through the brush toward the patio when I saw a shadow, but in the dark at that distance I couldn’t tell if it was the base of the patio chair or the hoped-for silhouette of a cat. I made my way down the hill and into the yard. The shadow moved. Fred had returned.

I am grateful for Fred the cat and for his return. But as I examine how I felt during the search, I wonder about the nature of gratitude. Does gratitude take us to a place where we try to hold on to something lost? Does being grateful mean we hope to keep situations, pets, relationships, people, the way they are? Did my search and subsequent panic nearing despair make any difference to Fred, or was he in complete control of the situation from the beginning, watching from under a bush, or obliviously enjoying jungle-kitty mode as he stalked a mouse or a mole in the dark? How much of feeling grateful is tied up in actually being selfish, or in trying to control, rather than letting things be as they are?

I held Fred as I sat in a chair outside in the dark, feeding him his favorite treats  and releasing my frustration over the whole ordeal, relieved, content, and grateful.